IAN MOORE is almost single-handedly leading the resurgence of all things mod. His laconic observations on life, from the problems of using the 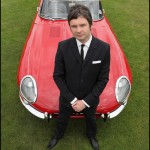 wrong vocabulary in a German Pizza Hut to an almost pathological hatred of most forms of physical exertion, have proved hugely successful with live audiences all over the world.

Ian was also, briefly, the warm up comic for the BBC’s ‘Friday Night with Jonathon Ross’ show, until the DAVID BOWIE incident, of which the less said the better. Ian has headlined at The Reading and Leeds music festivals, but he is too well dressed to consider appearing at Glastonbury.

“One of the country’s top comedians.”  The Guardian

“A brilliant storyteller”  The Boston Phoenix

“felt as though he was talking to a single person and not a theatre of hundreds”  punchlinemagazine.com