For the last three decades Ian Cognito has been an undecorated hero of the British comedy frontline. Never been on the telly, never done an advert, 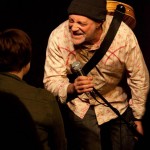 Whilst many of his peers have graduated to the cosy confines of light entertainment, Cogs proudly remains one of the country’s most seminal acts.

“Cognito puts them all in the shade. If you want to know what’s wrong with New Britain, Ian Cognito’s going to tell you. And if you don’t, you’d be advised to keep your mouth shut. Just stunning.”  The Guardian
“A raging bull goaded by a flaming sense of injustice.”  The Independent
“There is no doubting Ian Cognito’s blazing talent as a stand up”  Time Out

“This is controlled anarchy from Cognito. An old master at work.” Fest

“Probably the most talented stand-up that you’ve never heard of… ..clever songs and an unrelenting wave of perhaps the funniest jokes you’re likely to hear”. The Skinny