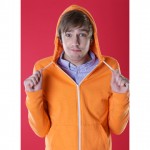 about the whole thing.

He’s best known to an audience far too young to attend a comedy club from his four year stint as the BAFTA nominated face of CBBC alongside trusty sidekick Hacker The Dog. Iain quit the ‘day job’ last year to devote himself more fully to his stand up and, if the reviews and TV appearances are anything to go by, could well prove his father wrong. Hacker’s whereabouts are currently unknown.