Gavin Webster is on the rise. He’s been on the rise for eighteen years. After making his modest debut in a pub in Gateshead in February 1993 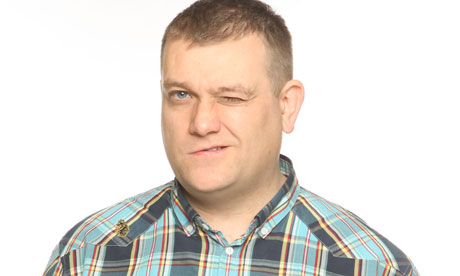 he’s done about three thousand gigs from Aberdeen to Abu Dhabi, Manchester to Melbourne and Hartlepool to Hong Kong. Famed and respected by his peers for his uncompromising and unusual approach and distinctly original routines, he now boasts a large cult following round the country and particularly on his native Tyneside where he sells out theatres with his one man ninety minute shows. Hard edged routines, quick-fire pastiche pieces, moronic jokes and sardonic songs, his unique style has brought him this kind of praise and attention.

‘His daftness is little short of surreal genius’ The Stage  ‘Funny, clever and as brilliantly observed as you’ll find’ The Scotsman