Mock The Week regular Gary Delaney used to organise conferences for some very important people indeed. It was in this capacity that he met Bill Clinton, Nelson Mandela, Gordon Brown, Maddy Albright, Kofi 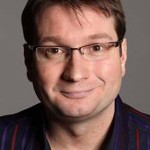 Annan and others. He can tell us on good authority that Gordon Brown’s lecterns are exactly 1.3 metres high and that the late Robin Cook had his own special tiny lectern. It was  during this time that he had a beer with Mick Jagger, a Kit Kat with Edwina Currie and a wee with David Baddiel.

These days Gary Delaney is much better known as a razor sharp one-liner comedian, who is widely regarded as being the most quotable. The high quantity of stand out gags leaves the audience struggling to remember them all. He loves each and every gag and you can’t help but be carried away by his infectious charm. He’s like a cheeky schoolboy who can barely hide his glee with each and every punch line.

Gary is the only comedian ever to get two gags in the same Top 10 for Dave’s TV Funniest Jokes from the Edinburgh Fringe. He now spends a lot of  the year touring, his last tour was extended four times and took in over 200 venues, he’s the premier gag smith of his generation and through his Twitter account he’s become one of the most followed and quoted comedians in the country.

Gary has written for Ivan Brackenbury’s Hospital Radio Roadshow (nominated for the Perrier Award in 2007 and 2008), 8 Out Of 10 Cats, The Friday Night Project and Radio 4’s The News Quiz.

‘Taut, brilliant one-liners. Delaney was worth the price of admission alone.’  Chortle