ELIS JAMES was chosen to host the prestigious new act showcase ‘The Comedy Zone’ at the Edinburgh Festival within only three years of his first gig. The following year Elis performed his debut solo show ‘The Most Cautious Little Boy in Wales’ , which was met with rave reviews. His follow up show was ‘Daytripper’ which then toured the UK.

Elis has also followed in the footsteps of Simon Pegg, Dylan Moran, Ardal O’Hanlon, Dara O’Briain and Ross Noble by starring in ‘Best of the 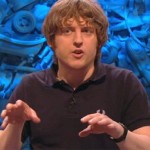 Edinburgh Fest’ at the Adelaide, Melbourne, Brisbane and Sydney Comedy Festivals. Elis is also a talented character actor, starring in the acclaimed sketch show ‘Superclump,’ and is a regular contributor to the Rhod Gilbert show on BBC Radio Wales as caretaker Rex.