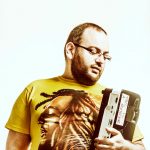 The ‘talking head’ genre of television is probably it’s laziest. Middle ranking comedians, journalists and presenters comment on clips spanning decades of TV. Each show will probably have a decade assigned to it such as ‘One Hundred Best Pet Food Ads From The Seventies’ to try and convince you there is actually a theme. As entertainment goes these shows are at best passable but ridiculously cheap to produce.

So, what if someone did it for real? Took some time to dig out the less obvious clips or to probe much more deeply into music videos we have all seen again and again?

In comes David Trent, a forty something junior school teacher, who sprinkles his carefully crafted narratives of tight, intricate gags over some film and TV clips you would be amazed even exist and plenty more you will see in a whole new light. Backed up by a plethora of high tech electronic whizzymajigs Trent has defiantly carved a niche for himself in modern comedy if not creating a whole new genre.

‘Brilliant and unique…genuine originality.’ Chortle   ‘A creator of bold, category-defying comedy.’ The Stage   ‘A first rate comic mind’ The Guardian

“A swaggering debut from Trent, a double act with a Dell Studio 17 that will live long in the random-access memory.” The Guardian

“You just hope he will cope with the vicissitudes of the success that will surely come .” The Independent

‘This stunning debut marries slick multimedia with the sort of bold, upfront attitude that usually heralds a major Fringe talent.’ The Scotsman