County Wicklow’s Danny O’Brien has a warm, chatty, anecdotal style that was honed whilst performing in tough Dublin pubs. Memorable 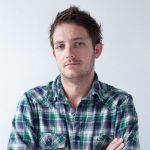 moments included having to physically wrestle a semi-naked man off his stage and seeing a woman glass her boyfriend in the front row.

Fortunately for Danny, he’s very funny, so he he can now pick and choose where he works and leave the less salubrious venues behind.

Like many comedians it was the Edinburgh Fringe where Danny began to make a name for himself and, despite being a relative newcomer, he now regularly sells his shows out. 2016 saw him being handpicked to appear in Perth, Melbourne and Adelaide as part of the ‘Best Of The Edinburgh Fest‘ Australian tour.

Irish TV appearances include The RTE Comedy Awards in 2013 and, much earlier on in his career, he beat sixteen of Ireland’s best up-and-coming acts and take the coveted Toilet Duck Award at Tedfest which is a celebration of all things Father Ted.

When not resident MC at Dublin’s Comedy Crunch in Danny splits his time between Ireland and the UK, festivals, comedy clubs and theatres.