Warning: include_once(): Failed opening '/homepages/25/d444154067/htdocs/customers3/iwantacomedynight/wp-content/plugins/wpyii2/wpyii2.php' for inclusion (include_path='.:/usr/lib/php7.2') in /homepages/25/d444154067/htdocs/customers3/iwantacomedynight/wp-settings.php on line 428
 Daliso Chaponda is an African featured on Britain's Got Talent.I want a comedy night!

2017 Britain’s Got Talent Finalist Daliso Chaponda was born in Malawi and began his comedy career in Canada. After a spot of bother with the authorities he took part in the 2005 Just For Laughs 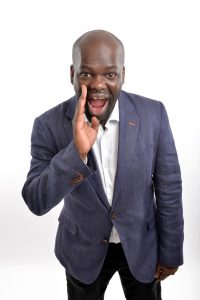 Comedy Festival with his show ‘Don’t Let Them Deport Me’. This was quickly followed by his new show ‘They’re Deporting Me Anyway’. In short, Canada is not the best place to see Daliso. Now residing in the UK he regularly appears in Africa and across Britain. But not Canada.

2018 sees Daliso embark on his first UK tour as well as the launch of his Radio 4 series Daliso Chaponda: Citizen Of Nowhere;

“Radio 4 is what I’ve listened to on trains and buses to gigs for years,” he said. “I am delighted I’ll now be able to tune in to myself.”

“Full of extravagant gestures and impassioned speeches. He inspires whoops and cheers from his watchers. Highly recommended” BBC

“His act is an exhilerating tour de farce” Adelaide Now