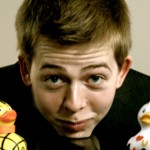 established him as one of the best up-and-coming one-liner comics on the circuit.

Intelligent wordplay and deliciously dark jokes nestle amongst a set rich with puns and oblique observations, all coupled with a talent for improvisation and physical comedy honed from three years with Edinburgh Festival favourites The Oxford Imps

“Absolute gold-plated bankers, brilliantly inspired lines even the most experienced punslinger would be proud of”.  Chortle