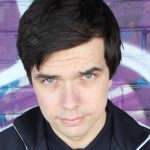 Cork’s Chris Kent could well have made it as an electrician but prefers to generate sparks of laughters as Ireland’s fastest rising young comedians. His sharp style preys on his own everyday life and his sometimes brutal self-deprecation makes for

Voted as one of the Top Five Irish Comedians by Hot Press Magazine in 2013, he was listed as “One to watch” by The Dubliner magazine the previous year.

Festival appearances include The Kilkenny Cat Laughs, Vodafone Comedy Festival, Galway Comedy Festival but it was his 2015 Edinburgh Fringe run that has brought him to the attention of a much wider audience.