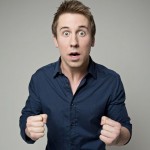 months of his first ever gig.

An old man in a young man’s body, he possesses the uncanny ability to both irritate and be irritated in a charming and endearing manner. Described as “The Larry David of the North East” Carl’s energetic, articulate and dynamic performance makes him a must see act. When not gigging up and down the country Carl is often support act for Chris Ramsey’s tours.

“Hutchinson held a 200-strong crowd in the palm of his hand.” The Publican

“Hutchinson’s trump card is the way he interacts with the audience, rolling with every ‘ooh’ and ‘aah’ his material generated, giving a dynamism and spontaneity to his performance.” Chortle