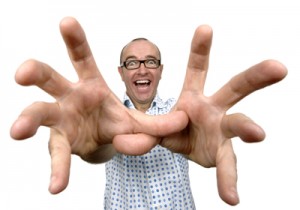 direct, brash yet affable approach make him a sought after comedian.

Combining high levels of energy with affable banter the uninitiated may miss his Swiss watch timing and his natural storytelling flair, making Brendan the ideal choice for a wide variety of events.

Bren’s other great passion is motorbikes. Being a fully qualified track mechanic and racer has seen him producing documentaries on the sport in addition to touring the Isle of Man tour during the TT and compering the Hell’s Angels annual Bulldog Bash which led 100% Biker Mag to write “I have never, ever seen so many bikers crying tears of laughter in my life”

You may also have caught him in Hollyoaks, Coronation Street, supporting Liverpool band China Crisis or on BBC R5 Live.

“One of the brighter names from the North West .. a great compere”  The Guardian

“incredibly refreshing” **** Metro “Brendan Riley does the business ” The Scotsman

“ Worth the price of the admission alone .. Scouse wit and raconteur who holds the show together and doesn’t so much warm up the crowd as set them on fire” Lancashire Evening Post