Self-confessed comedy geek, Barry Dodds took to the comedy stage at the tender age of 21 and soon had audiences eating out of the palm of his 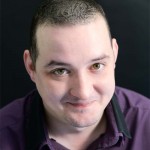 hand. Using his own combination of irrepressibly cheeky, and surprisingly dark ,material, he quickly found himself taking the national comedy circuit by storm.

A talented storyteller who uses whimsical imagery and evocative observations, Barry is an assured closing act, with regular bookings at many of the UK’s top comedy clubs including The Stand, XS Malarkey and The Frog and Bucket. His comedy has even taken him to Luxembourg, where his solo show proved so popular, he became the first ever comedian to perform on Luxembourg TV.

“Winning friends with his energy and spirit…” Chortle