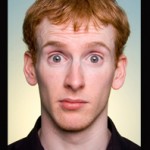 Like a ginger tom on speed Andy Watson practically climbs the walls of any venues that he appears at. A manic high energy style that would shame many a circus clown has brought inevitable comparisons to Lee Evans but Andy is nowhere near as sweaty and we doubt he owns a suit.

A Herculean work ethic and his ‘scorched earth’ policy of chewing the ear off any promoter daft enough to answer the phone made him a constant feature at Britain’s numerous comedy nights. All this effort culminated in him joining an exclusive club alongside Peter Kay, Alan Carr, John Bishop and Jason Manford when he won the City Life Comedian Of The Year.

Successful Edinburgh Festival runs culminated in work from comedy club ‘big boys’ The Comedy Store and Jongleurs and he was handpicked by Paddy McGuiness to support him on 29 tour dates to the delight of packed theatres audiences.

This is the story so far and those in the know predict we’ll be hearing a lot more from this wise cracking energy bomb.

“Very funny!” Paddy McGuinness   “An irresistible, infectious style that had the audience rapt from the get-go.” Chortle

“Like a force of nature he grasped the crowd’s attention and left them in hysterics.” City Life