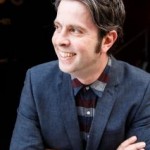 Brum’s Andy Robinson became a stand up quite accidentally as guitarist in ‘The Carpetsweepers‘ when his banter between songs reduced both the audience and his fellow musicians to hysterics.

By the time of the 1993 Glastonbury Festival, Andy’s asides were becoming more entertaining than the music so he entered a competition for up and coming comedians and won. Bye bye, Carpetsweepers….

Tour support includes Sean Lock, Rich Hall and regularly for Jo Brand who Andy has now worked with for many years… he even once supported legendary jazzer John MacLaughlin, but that didn’t work out quite as well as it could have….

“Robinson clearly has what it takes, he’s a natural”  The List