Alun Cochrane is a no-nonsense comedian who specialises in funny nonsense. Much of his comedy begins simply as something he’s seen, 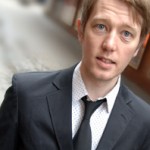 heard Alun Cochraneor felt in his own life, or in the street, or the kitchen, or anywhere and from that it blossoms into a highly amusing anecdote or a strange flight of fancy.

He is a master at observational comedy, telling tales about eating, sleeping, daydreaming, driving, being a son, father, brother, husband, friend, mortgage-holder, clothes-wearer, car-owner, radio-listener, train-traveller, door-opener (and closer), alcohol-consumer, hangover-sufferer, newspaper flicker-through-er, occasional football watcher, and general liver of life. In short; he gets material from anywhere he wanders in mind or body.

TV appearances include Michael McIntyre’s Comedy Roadshow, Soccer A.M, Live At The Comedy Store and he’s often seen on 8 Out of 10 Cats and Mock The Week. He can be heard on Frank Skinner’s Absolute Radio Show every Saturday morning from 8am and regularly on Radio 4 with credits including The Now Show, Just A Minute, Dilemma, Loose Ends, and Lee Mack And Friends.

“…rarely have such random musings been elevated to this level of hilarious artistry.” The Scotsman

“By the end of the show, some people in the audience literally can’t stop laughing. Expect Alun Cochrane to be filling arenas soon.” The Independent

‘A master storyteller, holding the audience before dropping a simple but exploding punchline’ Metro