Alex Boardman‘s ability to interact with any audience, his free flowing style and natural charm, means he is currently one of the most sought after acts in the country. 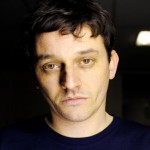 A lifelong comedy fan, Alex stormed onto the scene in the late 90’s, and quickly became one of the most popular choices on the circuit.

A lightening quick ad libber, with a charming edge, Alex is an established MC. His unique brand of “flattery and abuse” proves ever-popular with audiences, and although often dancing deliciously close to the boundaries of what is considered PC, the lack of malice, and warmth to his approach, means everyone feels they’re in on the joke.

His skills as a writer have also been in constant demand for Britain’s prime time TV and radio comedy shows, most recently writing the script for Paul Hollywood’s national theatre tour. He is also highly skilled at TV and tour warm ups, bringing his warmth and ease to a variety of audiences. Alex’s sharp writing skills mean if you’ve found yourself falling off your chair in a fit of giggles watching TV’s latest successful comedy offering, the chances are, Alex is responsible.

“Improvised witticisms from the acerbic Mancunian. A veteran of the Madchester phenomenon, his loved-up reminisces and tall tales can lead anywhere, on any given night.” The Times