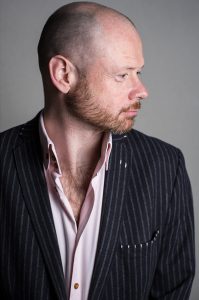 A core member of The Cutting Edge team at London’s Comedy Store, Alistair Barrie has  made numerous radio, television, corporate and festival appearances across the globe.

Alistair has taken seven solo shows to the Edinburgh Festival – his 2012 show ‘Urban  Fogey’ and 2015 show ‘No More Stage Three’ were both runner up for best show at the  Edinburgh Fringe in the Amused Moose Laughter Awards.

No More Stage Three, which told the tale of his wife’s breast cancer, was invited to the 2016 Perth Festival in Australia before a  European tour and dates at London’s prestigious Soho Theatre. He also appeared in the  hit plays ‘Breaker Morant’ with Adam Hills and ‘Coalition‘ with Phil Jupitus, .

Alongside former Perrier nominee Nick Revell, Alistair co-produced, wrote and performed in ‘No Pressure to be Funny,’ a monthly topical show and podcast presented by LBC’s James O’Brien, described by The Daily Telegraph as ‘the fringe’s answer to Question Time‘ and by The Observer as one of the top ten podcasts of 2015.

‘One of the circuit’s classiest stand ups’ London is Funny